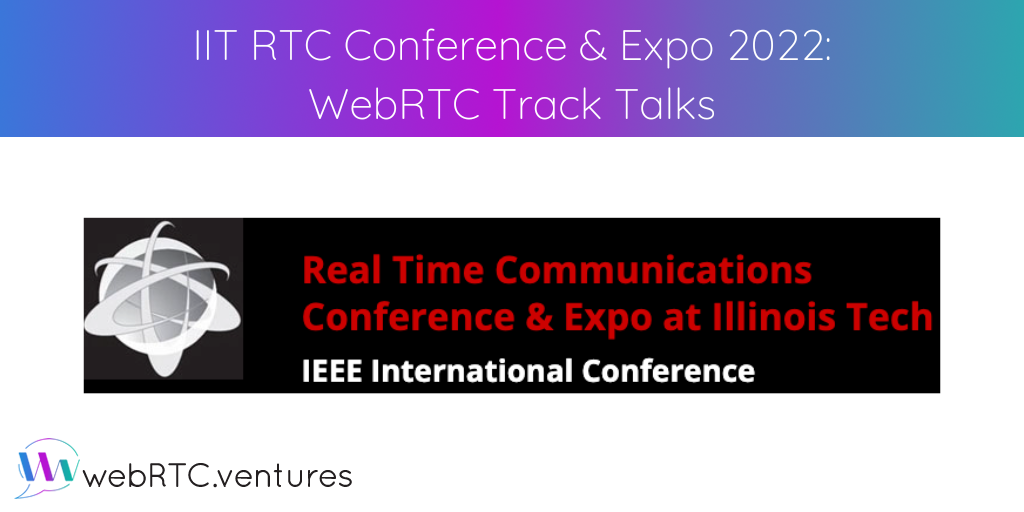 As the chair of the WebRTC and Real-Time Applications track at the 2022 Real-Time Communications Conference & Expo, I’m very pleased to share this year’s list of speakers and topics. The October 10-13 conference will once again be virtual — and free!

WebRTC.ventures is proud to be a silver sponsor for the conference and also to have one of our brightest WebRTC Developers presenting a session on CPaas optimization.

Keynote: Why is Zoom so much more popular than standards-based videoconferencing?

Video conferencing has been around since the 1990s, first based on ISDN for digital phone systems, then H.323, and then SIP for the Internet. The underlying assumption was that phone calls and group communications would all rely on the same standards, creating a universal and seamless user experience. But even as COVID-19 made Zoom a generic term, these standards-based solutions never got much traction. Even for the popular applications, WebRTC seems to have made modest inroads. In this talk, I’ll try to reflect on the reasons for this development, and why other standards-based internet applications such as web browsers and email have been more successful. Video conferencing also shares this “fate” with text-based chat, where standards-based solutions are competing with WhatsApp, Slack and other proprietary platforms. I believe that transition from (room) hardware to downloadable software, control protocol complexity, industry structure and communication patterns are at least partial explanations for this development. Finally, I will speculate on how video interaction might evolve in the next few years.

WebRTC can often be overwhelming for developers not accustomed to working video/audio. So using CPaaS platforms is their go-to because of the ease of quickly getting video integrated with their application. However, because of all of the layers of abstraction it might seem that there’s no room for optimizations to be done but you’d be surprised about all the room for improvement. That is what we’ll explore in this presentation with one of the most popular CPaaS platforms, Vonage Video API’s.

Building the Next Gen User Experiences in Live Sports Speaker

Behind the scenes: WebRTC’s role in film and television production

Due to the lack of a standard signaling protocol in WebRTC, it has not been easy to match Zoom in end-to-end efficiency, especially in multi-user conferences.

However, these efficiencies are achievable with a set of coordinations between the clients and SFU. We’ll demonstrate the techniques to implement adaptive streaming and dynamic broadcasting: two features that allow applications to be vigilant on bandwidth requirements and therefore improve the quality of experience.

End to end efficiency in WebRTC

WebRTC has emerged as the primary protocol for the most demanding, ultra real-time video streaming scenarios, such as telepresence, conferencing, surveillance, and drone control. It has also found massive adoption in the media & entertainment industry, both as a production collaboration tool and for streaming live events. In this session, we will go over how WebRTC is being used to enable highly distributed industry workflows, specifically live concert broadcasts, monitoring on-set cameras, virtual set productions with Unreal Engine, and remote VFX and editing. We will also share lessons learned adapting WebRTC to high-frame-rate (60fps), high-resolution (4K) and high-dynamic range (HDR) video streaming applications.

The Kamailio project recently celebrated its 20th year and continues to be a dominant force in open source RTC. From security to scalability, SIP to WebRTC, Kamailio continues to integrate new features and remain 100% open source.

How WebRTC Can Better Enable the Metaverse

As the metaverse takes shape, there’s no doubt augmented reality (AR) and virtual reality (VR) will play a crucial role in how users engage with it. To overcome the challenges of AR and VR, such as device limitations and feelings of isolation, WebRTC offers solutions.

The metaverse means many things to many people. This talk will focus specifically on two areas: augmented reality and virtual reality. If we are to build a thriving metaverse, we need to tackle the unique challenges of AR and VR and seize their unique opportunities.

A closer look at the RTCDataChannel API

This talk will offer attendees an example-driven look at the often under-explored `RTCDataChannel` API. Given all of the challenges and interest around audio and video, data channels find themselves as the short leg of WebRTC’s three-legged streaming stool.

Cascaded conferencing has been around for quite some time already, especially in the context of audio mixing. The main idea at the time was linking separate conference bridges somehow, in particular at the mixing level, so that they could cooperate and interact to help scale conference rooms. While the world of communications has changed considerably since then, the same fundamental concepts can still help WebRTC applications, even when using SFUs rather than mixers. In fact, cascading SFU instances can help distributing injected streams across multiple WebRTC servers, which can be useful in different ways: it can help scaling the distribution of streams to a wide audience (e.g., large webinars), making it easier for users to connect to the server closest to them even when it’s not the one hosting the room (e.g., geodistribution), or more in general help implementing applications that may benefit from taking advantage of more than one server at the same time, whether those applications are conference related or not.

This talk will present the work that was made in that direction for the open source Janus WebRTC Server, starting from how such a functionality was handled up to now (e.g., to facilitate large scenarios like IETF meetings), and how that had to be changed to accommodate support for PeerConnections with multiple audio and video streams.

RTC has traditionally been quite a complicated experience for developers to build, regardless of DIY or vendor selection. There are several significant development processes: understand the best practices for your particular use case, design your UI/UX, build the business logic, integrate for multiple platforms, and much more.

In this presentation, we’ll look at how to build and customize an application with no coding required. Come learn how we’ve made this entire process much simpler for anyone who is looking to build Real Time Applications with a visual designer that allows you to customize the look & feel of your application, choose the features you want to enable, and generate the personalized source code which deploys to all 6 major platforms from 1 codebase (iOS, Android, Web, Windows, MacOS, Linux). From there, you can further customize every aspect of the application (UI/UX, business logic, add additional features) with a standardized Customizations API.

Evolution of WebRTC Use-cases after the COVID Pandemic

After ten years of slow and steady increase, interest in WebRTC has been massively accelerated. The onset of the pandemic rocketed the need for real-time collaborative experiences at both small and grand scale, while at the same time increasing the world’s comfort level with the technology. We have seen a huge rise in productivity, collaboration, and social environments mapped onto social spaces.

With regard to the future of WebRTC, discussion included:

Creator-driven content will continue to rise – live commerce, concerts, social. So will the need for highly produced video experiences made possible by great creator tools. At every layer, we’re actually still very early in the evolution of where the use cases for WebRTC can and will go. Every space is going to grow and WebRTC is a core building block for that future.

Panel: WebCodecs, WebTransport and the Next Generation of Web Media APIs

The merging of realtime and streaming technologies has exposed the need for a common set of tools to allow developers to build next generation communications applications.

This talk will build on last year’s session on WebCodecs by introducing the WebTransport API. Using demos, we will illustrate how the new APIs can be used to develop exciting new applications.