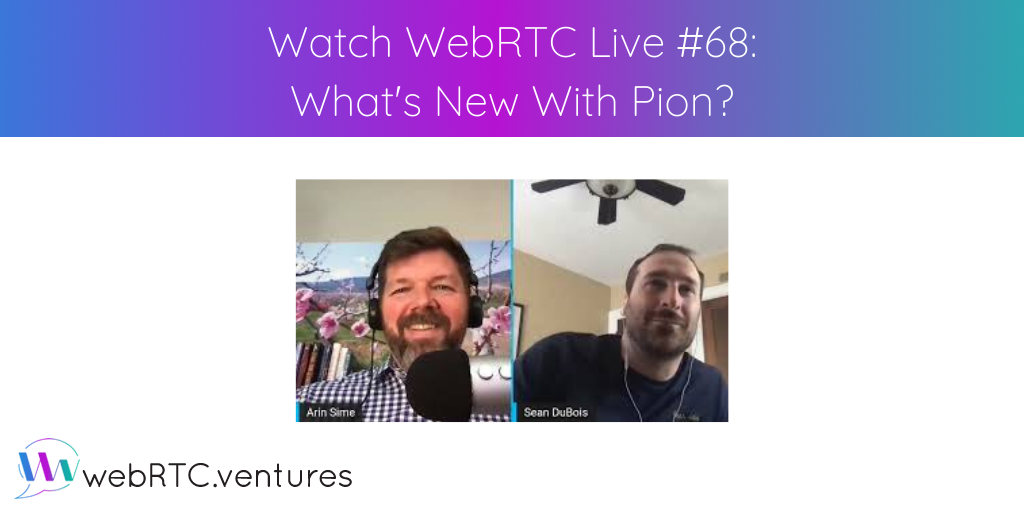 On June 15, 2022, Arin welcomed Sean DuBois back to WebRTC Live for another appearance on the show. Sean has become a leading advocate for open source in the WebRTC community through his work as the creator of Pion and other WebRTC knowledge sharing projects. He currently works as a Developer at Twitch. He has also worked as a Developer at Apple, Amazon Web Services (AWS), and Lightstream, all in different types of real-time communications roles.

Sean shared that he started Pion.ly about 5 years ago after asking the questions, “How can we make WebRTC easier and more accessible?” and, “How can I unblock people doing interesting things?” When he started writing this WebRTC implementation in the Go programming language, he really had nothing particular in mind. His guiding use case was, “I don’t know your problem.” He looked at it more as a general purpose WebRTC implementation that could be used in a wide variety of use cases.

WebRTC For the Curious

WebRTCForTheCurious.com is another of Sean’s projects he started because of the lack of well-maintained documentation on WebRTC. In addition to information on WebRTC, the site now includes interviews with some of the founders of the different protocols used. Sean hopes to see the site also grow to include more “real world” implementation advice since so much of that experiential knowledge tends to stay within the private companies building their own APIs and is not shared publicly.

WebRTCWork.com was founded to help demonstrate the wide range of projects and companies working in this space, which will make WebRTC more accessible for employers, job seekers, and those generally searching for information. It allows people to see the landscape of what is happening in the WebRTC community.

Sean recently joined Twitch where he is helping implement and problem-solve many projects using their existing Pion implementation. A notable one involves massively-scaled Go ingesting RTMP traffic and adding WebRTC to these servers. Also augmenting existing technology with WebRTC.

He talked about many WebRTC use cases, specifically mentioning Livekit, an open source WebRTC infrastructure project. He also talked about use cases in robotics, hospitals, agriculture. Other use cases are data channel specific like the Tor Project and WebTorrent. Although we didn’t discuss it in the episode, if you’re interested in seeing more WebRTC use cases and Pion specific examples, Sean gave a very interesting Pion presentation at GoLang 2021 that shows many use cases.

Sean also discussed a Matrix SFU to SFU project (cascaded distributed SFUs). It’s hard to scale and manage SFUs so he is excited to participate in this project to build a way to cluster SFUs across different WebRTC implementations.

A ton of questions for Sean!

Arin – and our viewers – had a whole host of questions for Sean as listed below, Some we’ve added the answers, for the rest we encourage you to watch the episode! Also visit github.com/pion/awesome-pion!

UP NEXT! WebRTC Live #69: What Have Our Own Experts Learned Lately?
Wednesday, July 20 at 12:30pm Eastern.
Register today!