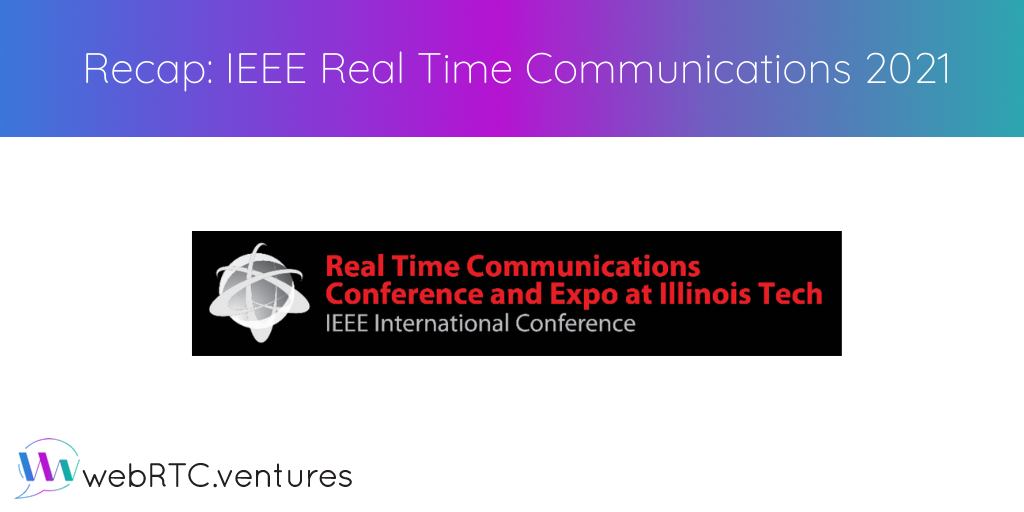 The Real Time Communications Conference at Illinois Tech (my alma mater!) is a yearly event that joins real time communication experts and enthusiasts from all around the globe. They share their viewpoints on how RTC technology will define the future.

This year, IEEE Chicago was the main sponsor and IIT RTC became an IEEE International Conference. Also this year, our team at WebRTC.ventures had the pleasure to be both sponsors and presenters, and I was the chair of the WebRTC & Real-Time Applications Track. It was a great conference and I was proud to play a part in it.

During the WebRTC track, we were fortunate to have numerous experts in the field that talked about:

In the first presentation, WebRTC 1.0 Browser Implementations by IIT’s Karl Stolley, we learned about bugs still present in some browsers, including Firefox having issues with connectionstatechange and missing icecandidate error types, Chrome not supporting RTCDatachannels with blob, and Safari not supporting auto rollback to achieve perfect negotiation. He also covered some of the recent important fixes!

Following this talk, Dean Bubley presented Beyond the plain-old phone call – the rapid shift of voice communications to context-based RTC. Dean provided a lot of insight about how we have been moving from telephony to more current state-of-the-art solutions in voice technology.

Alan Quayle, the founder of TadHack (which as usual held an event in tandem with the conference) introduced TadHack sponsors subspace and AWA. He also talked about the stats and awesome demos from participants all around the world. (Save the date: Alan will be a guest on our WebRTC Live webinar series on December 15!)

Later on, we heard about real time monitoring from Lorenzo Mangani, CEO at QXIP. He presented to us a new open source monitoring framework, cLoki.

At the end of the first day, Justin Williams, a Senior WebRTC Engineer here at WebRTC.ventures, shared some best practices and philosophies for building maintainable WebRTC applications.

The next day, we learned about WHIP, the new WebRTC ingestion protocol for broadcasting. Lorenzo Miniero, creator of Janus, spoke about the protocol and a demonstration he built using WHIP (basically HTTP signaling messages) to broadcast media using a gstreamer based script. You can find his talk slides here.

In this same track, Dan Jenkins, expert in the RTC industry and founder of NimbleApe, presented on Professional AV with WebRTC. He shared some great tips such as prioritizing audio, leveraging available codecs and audio flags (e.g: auto gain control, echo…) or getting off the public internet using TURN by default.

Later, Varun Singh, Callstats.io founder and head of call quality at 8×8, shared his experience and knowledge about improving organizational efficiency with analytics. They can reduce support tickets by 10-50x by setting audio quality expectations with the users! (Save the date: Varun will be a guest on our WebRTC Live webinar series on November 10!)

We also heard from Sean DuBois, creator of Pion, about the current state of the Pion open source framework and all the use cases where Pion has been used: IoT, live broadcasting, gaming, accessibility with live speech to text. You can find his slide deck here.

At the end of Day Two, we had a great WebCodecs API panel with Bernard Aboba (Microsoft), Chris Cunningham (Google) and Paul Adenot (Firefox). In their presentation, they first introduced the possibilities that WebCodecs and WebTransport browser APIs can and will provide in the future. They followed with several demonstrations of how WebCodecs API could be used to encode/decode processes in the browser.

In the general keynotes track, we had a talk titled, The challenges of building for developers. Anthony Minessale, founder of FreeSwitch, spoke about how they built their platform to empower the developer and the challenges faced there.

Amongst other great keynote speakers, we had Henning Schulzrinne, Professor of Computer Science at Columbia University, presenting AI/ML are not sufficient: How to program billions and billions of IoT devices. He explained how we can make large networks of IoT devices more useful and described a prototype SenSQL effort that leverages well-known SQL models to retrieve data, visualize time-series data, and create abstractions that do not depend on network architecture and hardware modules.

Another enjoyable keynote I attended was Mariano Tan, CEO of Prosodica, talking about What analyzing call center conversations can teach us about good conversational AI.

Check back for videos of each talk!

One of the great things about this conference is that the talks will be posted on YouTube. We will publish those links here on our blog. So, if there is anything you missed or want to rewatch, the opportunity will be there. Stay tuned!

Want to talk with the experts?

To learn more about how you can use WebRTC to grow your business — whether you are interested in real time communication capabilities in telehealth, education, broadcasting or more, contact the experts at WebRTC.ventures today!