Virtual Media and Film in the Pandemic

Home 2020 August Virtual Media and Film in the Pandemic 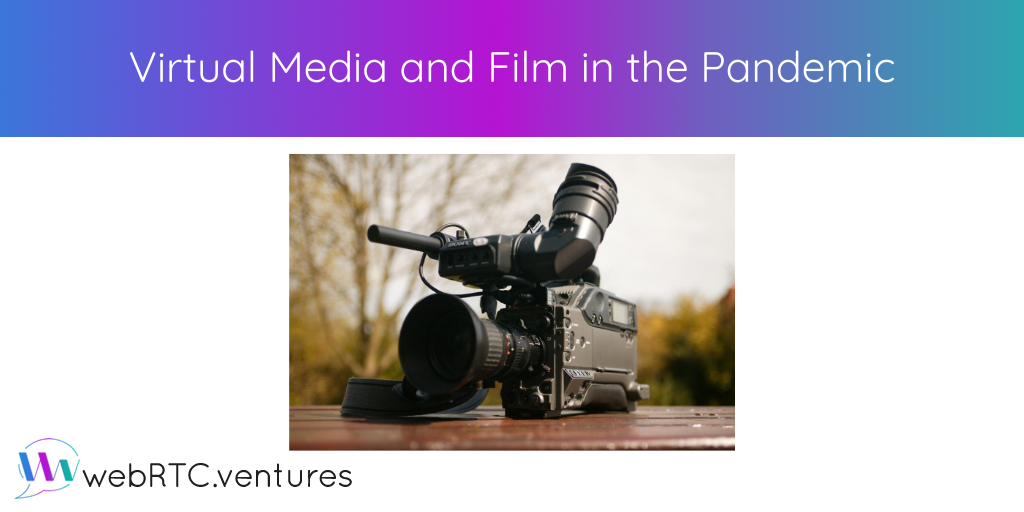 Part of our blog series on Virtual Events in the Pandemic.

“Hollywood is more of an idea than a place.” – Kevin Bacon

If Kevin Bacon1 is correct, that’s a good thing. Because right now there are a lot fewer people in those Hollywood studios due to the pandemic. But that doesn’t mean the creative ideas of Hollywood have to be put on hold.

A number of TV shows have tried filming remote episodes, sometimes making the plot based around video conference tools, such as the Parks and Recreation special episode where cast members catch up with each other over video calls. Other shows such as 30 Rock filmed an episode with pandemic themes but using socially distanced settings, such as the scene where Tina Fey2 has an argument with a man in New York about why he’s not wearing a mask.

Everyone, from these type of show to local TV stations to big movie productions, are considering alternatives to the traditional filming experience. While some actors must be on set, and reporters must still go out to capture the news live and in person as it happens, there are still many other aspects of TV and movies that can and must change due to the pandemic.

Certainly one non-technical impact of the pandemic on society is consuming too much news media. More people are working from home, or sadly out of work, and the news globally right now is terrifying (as well as in my home country of the US). While it’s not healthy to consume all that bad news, here we are, scrolling through social media feeds and watching more news than is good for our mental health.

But watching or listening to the news these days is different than it used to be. There are very few in-studio interviews, and instead people are joining from home, often using Zoom or Skype. This has led to many more moments of children running into the background of serious news interviews, like this infamous clip from a couple years ago:

These days, there’s no more awkward apologies needed for seeing children in the background or hearing family noise during a business call – it’s just how business is done in 2020. Right now, the only more tired and worn out phrase in modern business than “sorry, that’s my kid screaming in the background” is “can you see my screen?”

But I’m not going to tell you how WebRTC can solve family dynamics or create a quiet home office for your big TV interview – those concerns are outside the scope of our software development capabilities and are simply an endearing part of society today.

Instead, I thought of adding this topic to our blog post series on virtual events in the pandemic because of an interesting post by our friend Lorenzo Miniero at MeetEcho (founder of the Janus media server), who wrote an interesting blog post about incorporating broadcast streams into media interviews:

This got me thinking about other people who are dealing with the challenges of live video production who have reached out to us lately. For the home-based interview, using a standard meeting tool may be fine if you can stream the video into your production facilities at the TV studio. But how much better would it be if you had a custom web app that the interview subject uses which can then automatically stream, record, and process that video in a more seamless way?

Or maybe, the real efficiency improvements in a TV or film studio have nothing to do with the live guests, but more with the other processes happening amongst the production crew? We’ve spoken with multiple people this year looking to improve various aspects of video production and collaboration when so much of their workforce is now working remotely.  For confidentiality reasons I won’t describe their various ideas here, but I think there’s a lot of room for improvement in that industry. And WebRTC is definitely one of the technologies that should be used to improve video and film production processes.

I have a brother who is a manager in a major TV channel’s production and editing team, and the work he’s done to get his team all collaborating remotely is quite impressive. They don’t expect to go back to work in person this year, but even when they do, I suspect many of these business process changes will stay in place. For instance, even though he and his crew may be back at corporate headquarters, they probably won’t send as many people out into the field. For cost efficiency as well as health reasons, they can cut down on a lot of travel with the changes they’re making.

As I’m writing this, many late-night shows are going back into the studio. After months of doing their shows from home bathtubs, back porches, and other funny locations, they have decided to return to some type of normalcy. But like the film industry, it’s still not completely normal. Productions must take precautions and prepare for potential outbreaks by creating different pods of crew members and limiting contact on the set, while at the same time still making quality programming.

WebRTC video won’t be able to replace those intimate love scenes in a movie when the actors have to socially distance. (Well, maybe someone will try that, but it won’t be us!) But WebRTC and live streaming technologies can be used to help improve the collaboration both on the movie set and back in the studio.

Video production may never be the same – are you ready?

The era of social distancing will not end soon. And when it does, many of the changes we are making to our business processes will stick around. This applies just as much to movie sets and video production as it does to so many other fields.

How many people are involved in your production process? How many of them are used to working in person? The remote processes you are putting in place now can create efficiencies and cost savings even after the pandemic passes you by allowing more team members to work remotely.

If you’re ready to build a custom video application that lets your team collaborate on video and audio production while still working remotely, contact us!  We won’t even require an on-screen credit for our work.

1 Supposedly all actors are no more than six degrees separated from Kevin Bacon. Although my acting career is extremely limited (I was called onto stage from the audience once at the Kennedy Center in Washington DC for a comedy sketch, so I do have some thespian skills), I suppose you could say I still have some connection to Kevin Bacon, although it’s a bit stretched. I studied electrical and computer engineering at the University of Virginia, which means I spent a lot of time at their Computer Science building. It’s quite possible that the thing UVA Computer Science was most famous for at that time was developing and hosting the “Oracle of Bacon”, a website that compiles movie credits and allows you to determine how many degrees of separation any actor has from Kevin Bacon, which was actually a pretty interesting computer science problem at the time. To be clear though, I had nothing to do with it, I was just spending all nighters on C++ projects in the basement of that building at the same time (1995) as the Oracle was being built on the more prestigious floors above me.

2 Tina Fey graduated from my alma mater in 1992, the University of Virginia, the year before I started. I didn’t know her. That is my second shameless plug for UVA in this blog post, and I promise I’ll stop now.