Virtual Concerts in the Pandemic – Part 2 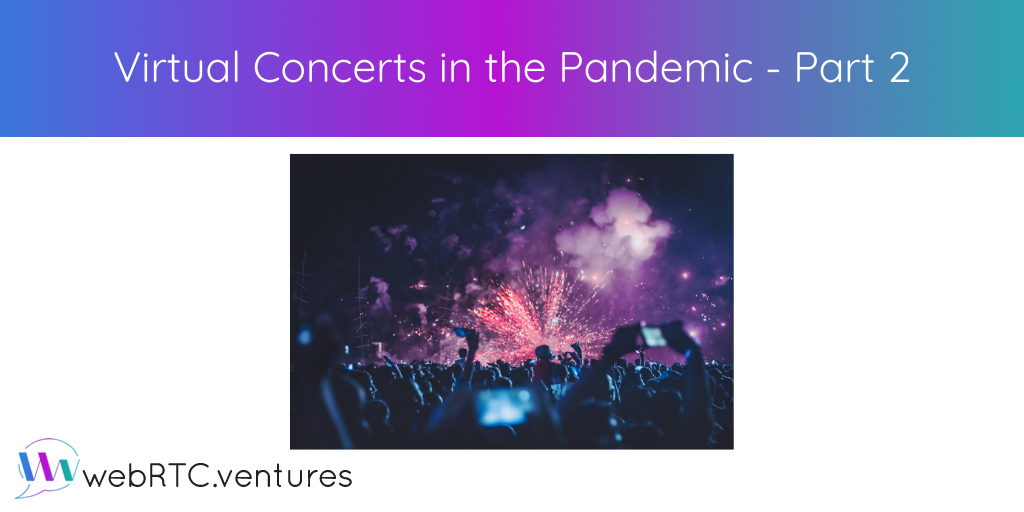 Part of our blog series on Virtual Events in the Pandemic.

I already wrote one blog post in this series on virtual concerts, but I couldn’t resist writing another.  What can I say?  I really miss live music.

I’ll touch on a few aspects about live streaming music in this post. My first take is inspired by a recent radio “in home session” that I listened to. I’m a big fan of local radio stations, and my favorite one here in Virginia is WNRN.org. The listener-supported radio station plays a wide range of music that can also be streamed online. My favorite program plays every Saturday morning. It’s a three-hour Grateful Dead show that’s been playing jam band music weekly for well over a decade. As a donor to the radio station, I’ve had the chance to go to the studio and watch them make the “Dead and Phriends” show, which was a lot of fun.

Another benefit to donating to local radio is you can sometimes meet bands before local shows or private studio performances. Last year, my wife and I met Rodrigo y Gabriela when they played a show in Charlottesville on our 20th wedding anniversary. I don’t think they intentionally timed their tour around our anniversary, but it was a nice benefit for us.

These days, tours are cancelled and in-studio performances are on hold due to the pandemic, but WNRN is looking for other ways to engage with their supporters and provide personalized experiences. Like so many things right now, that meant a Zoom web conference.

A live performance over Zoom

Devon Gilfillian recently did a “home studio session” on Zoom for WNRN, and I was excited to attend (virtually). Devon Gilfillian is a very talented songwriter and singer from Nashville. One of his songs getting a lot of airtime right now is “The Good Life,” a very “feel good” song with powerful lyrics about racial harmony.  Devon also made history recently by performing the first virtual singing of the national anthem at the first NASCAR race during the pandemic. That was also the first NASCAR race since they banned the confederate flag, so it was powerful to see Devon, who is African American, sing the anthem and then raise his fist in the air in solidarity with Black Lives Matter.

WNRN interviewed Devon over a Zoom call, with Devon in his home studio, the same place he sang the anthem.  The radio host and Devon were on camera, but the video was only for the benefit of the few dozen of us donors watching virtually. The main purpose of the call was to grab the audio from the interview, which was later edited and has been played on WNRN radio.

You can see how the interview looked to me in the screenshot below.

The first part of the show was an interview, and then Devon played a couple songs for us, including The Good Life.

It was a really nice experience, and I applaud WNRN for doing events like this. Having said that, it also showed some of the challenges of playing live music remotely.

On a purely visual level, if you’re going to do a lot of video interviews, you need to make sure you have good lighting and sound. Multiple times during the interview, you could see Devon adjusting his camera, likely trying to get rid of the glare that was coming from the window behind his head. The lighting in his national anthem recording was much better. That’s not a big deal, though, because I’m sure he knew this was a recording for a radio station and so the video wouldn’t be used.

But recording a music performance over Zoom isn’t ideal, either. I imagine the radio station did some editing afterwards, but during the live experience, the audio from Devon’s side was notably lower than the radio station interviewer’s microphone. The microphone on Devon’s side also had trouble at times picking up the sound of his acoustic guitar as he played, and so the quality was certainly not as good as when WNRN does studio interviews.

Again, I appreciated what both the radio station and Devon were doing, so I don’t say this to overly criticize them. This is just an example of how hard it is to get these things perfect when done remotely. I still enjoyed the experience and seeing the interview live.

Can you play live music together over WebRTC?

Doing an interview over a video conference call is one thing. In the story I shared above, it’s one musician playing at home. The biggest challenge is audio quality, but at least you’re not worried about latency or delays in the audio. Those come into play when you’re trying to have multiple musicians collaborate together remotely.

Whether it’s using Zoom or any WebRTC video conference tool, having two or more musicians try to play music together from different locations is much more complex. Consider the following screenshot, where two jazz musicians are collaborating together from home.

Jazz is all about improvisation, so each musician needs to hear the other playing in real-time in order to know when they should jam out a solo of their own. Any latency in the call, where the audio freezes or skips some audio packets, or is delayed even by fractions of a second, can cause the musicians to completely lose their focus. An amateur like myself might not hear that delay, but I’ll certainly notice it if it affects the quality of the play.

This is why in the virtual concerts I’ve watched during the pandemic, the band is always together in one location, playing together live, while the rest of us are streaming it. I’ve also seen some bands do recordings from home. One of my favorite bands, Turkuaz, made this excellent video from their separate homes:

I don’t know exactly how they recorded that video. Based on what I read in this article, they recorded it while listening to each other live. Most likely, each of their parts was recorded locally and then mixed together later, allowing for the high quality of the final product.

The difficulty in recording live music from remote locations

Why is it so hard to record live from remote locations? Latency. One of the DevOps experts on our team at WebRTC.ventures, Hector Zelaya, a musician himself, recently shared this video with me from “Jazz Night in America”, where they do a very nice job of explaining how the latency of video calls can affect music performance. That video is where I took the screenshot above of the jazz musicians playing. I recommend watching the full video to see their take:

The musicians in the video talk about using an open source tool called JackTrip for remote jam sessions. This tool does a better job of handling the latency as much as possible. Also mentioned in the comments of that video (if you trust YouTube comments) are tools like Jamulus or NinJam. I don’t have personal experience with any of those, so I’m not making any recommendations.

Where to go next with remote live performances?

In my first post about virtual concerts, I focused on replacements for attending concerts and music festivals in person. But there are many other use cases in the music industry being forced to adapt to the pandemic right now. In this blog post I’ve highlighted just two: promotional appearances like “in studio sessions” and remote jam sessions.

While meeting tools like Zoom and social tools like Facebook Live have been a first attempt by many in the music industry to innovate during the pandemic, there is room for a lot more innovation.

We’ve spoken with enough potential clients from the music industry to know that WebRTC will play a role in that innovation. Building custom solutions where you can have more control over the audio streams and settings, combined with existing music production software and hardware, offers the possibility to create something as unique as your music.

While the pandemic has made these ideas more important than ever, aspects of these new musical experiences and production workflows are likely to survive the pandemic itself.

Are you in the music industry and have creative ideas for how you’d like to produce music events during the pandemic? Do you have ideas for how to improve those experiences for musicians, as well as their fans?

At WebRTC.ventures, we have experience building live video applications for a variety of industries, and we’d like to help you bring your ideas to life.  Contact us today, and let’s bring back live music!