We’re very proud to have participated one more time in the Telecom Application Development Hackathon (aka TADHack). TADHack is the largest telecoms-focused hackathon worldwide. This time it was the TADHack-mini Orlando 2017, which happened on March 25 and 26 in Orlando.

Germán Goldenstein, Rafael Viscarra and Fernando Vasquez from our team participated remotely and won a sponsor prize from RingCentral for building the “Telemergency Line app”. This is basically a service that provides virtual assessment on emergency situations via video-chat and phone calls using a panic button as the entry point of the flow.

Watch the demo of our application 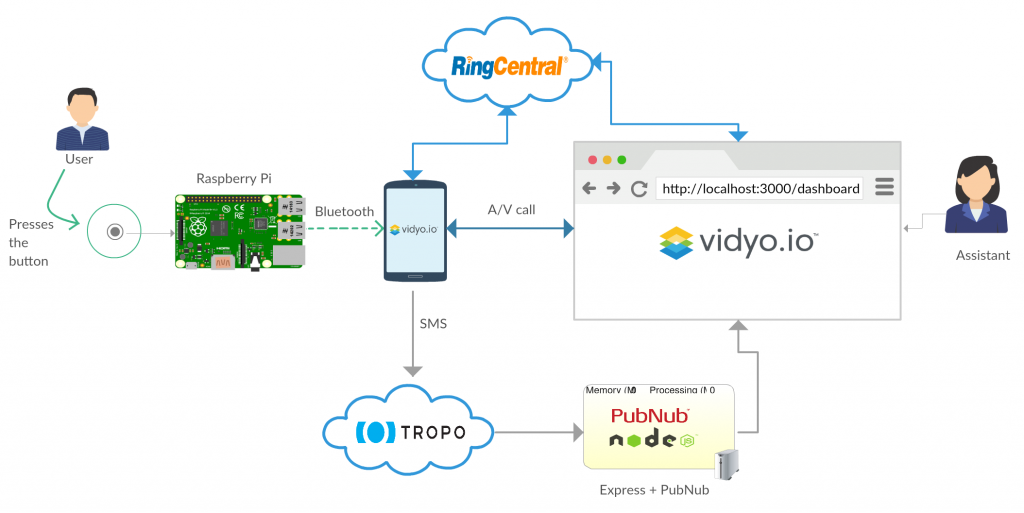 About the resources used in our Hack

Vidyo.io is a cloud API that makes it easy to embed multiparty video chat into your mobile, web, or native app. We were able to create the video-chat communication between a web client and an android app in a really short time

Tropo is a cloud API for Voice and SMS. You can choose if you want to just write your script and host it in Tropo or host it in your own server.

It wasn’t our first time in TADHack events

The first time we participated in TADHack was in TADHack mini Chicago 2015 where Nestor Bermudez and Arin Sime won the sponsor prize for Telestax for building the Apple Watch Rate Monitor, an application for apple watch that measuring the cardiac pulses detects a potential heart attack, and alerts the user and their contacts through SMS and real-time messages.

The second time was in TadHack Global 2016 where Germán Goldenstein, Nestor Bermudez and David Alfaro participated from New York and won two sponsor prizes for Tropo and VoxImplant. In that hackathon we built a Virtual Healthcare Triage app, that is essentially a multichannel bot app based on api.ai

This last time was awesome! Especially because we were able to do it remotely. I’m in Argentina, while Rafael and Fernando both are in El Salvador. Although we couldn’t be there on site in Orlando, it was a great opportunity for testing and playing with these amazing APIs and cloud platforms, and it’s a sure thing that we will keep participating in the next TadHack events.

We are looking forward to seeing you at TADHack Global 2017!

How can we help you revolutionize communications?

As you can see, our team loves building interesting communications applications. Regardless if your application uses video, voice/telephony, SMS, or all of the above, we can build it for you! We can even add in some Internet of Things and Raspberry Pi devices if your app calls for that too. Just contact our team with your idea and we’ll be happy to provide you a quote on our services.